How many kinds of Antarctic magic can there be? We thought we’d seen the most amazing, magical place at Barrientos Island, and then ”Oh what about Half Moon Island?”, and then “Oh my goodness, Paulet Island was a truly exhilarating experience”, and then “Deception Island was absolutely one of the most extraordinary places on the planet”. And then, today, we experienced another whole level of magic.

Actually, three kinds of magic today. To begin with, there were the whales. We woke this morning to a calm sea and the dramatic, mountainous terrain of Charlotte Bay, on the western side of the northern most part of the Antarctic Peninsula. As we were finishing lunch, the first whales appeared to starboard. And then portside, and then more on the other side; we were running back and forth and all along the decks watching these magnificent mammals feeding on krill swarms around our little ship. We watched them slowly curve through the water, dorsal fins and long dark backs exposed. We watched them turn and head down into the depths; their vertical tail flukes flicking to the sound of a flurry of deckside camera shutters. And most movingly, we listened to their deep, low, ‘appreciative rumblings’ (as described by Mary-Anne Lea) as they fed on those krill (so dense they even show up on our ship’s echo sounder). With perfect timing, this display was followed up by a terrific presentation by Mary-Anne on the ‘Cetaceans of the Southern Ocean’, including their origins, behaviour, migrations, physical features, and complex songs. 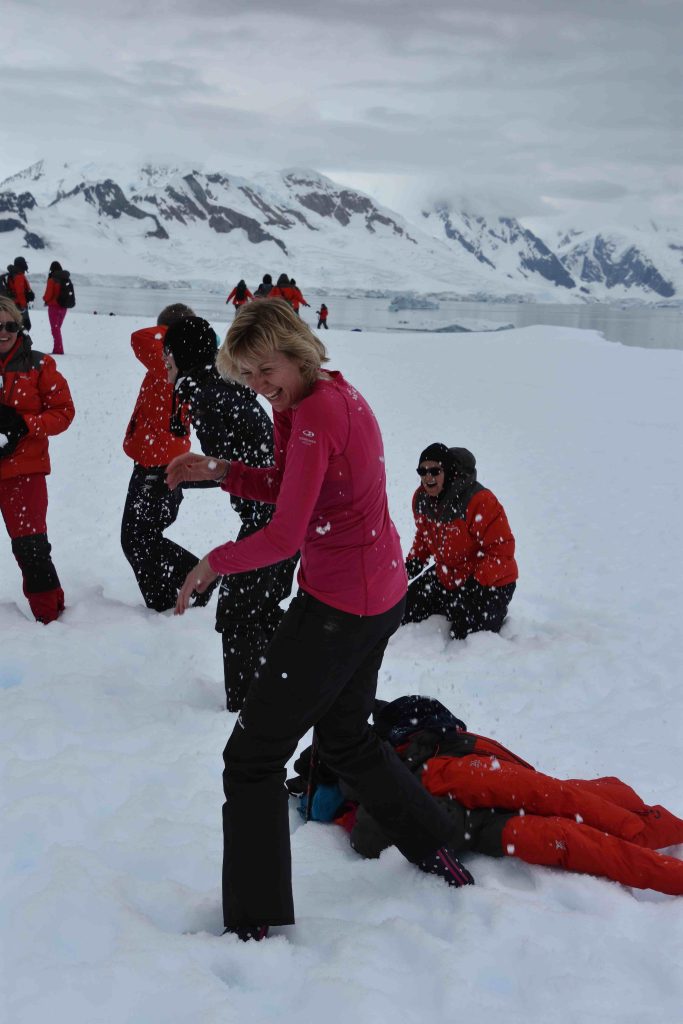 Snowball fight on the Antarctic Peninsula

The second kind of magic was exploring Portal Point. This is a seriously beautiful, calm, exquisite place; one to spread peace throughout your soul. The zodiacs wove through icebergs to land us on a rocky point. We kept clear of some Weddell seals dozing near the landing point and climbed a steep snowy slope up to the plateau. Calm, clear bays curved below us, dotted with boulders and icebergs (and the icebergs were dotted with the odd seal or Chinstrap penguin). The water trickled and lapped and the ice dripped to create a kind of aquatic orchestra. At the top of the slope we lay on our bellies and peered into the black depths of a crevasse. We lay on our backs and felt the layers of metres of snow underneath us, and believed we could sense the ancient Antarctic continent below us too. We talked about Antarctic history and philosophy and seal identification and snow and glaciers and “Antarcticans” and leadership and whale poo. We had a snowball fight and did yoga and danced and slid (or rather, hurtled) down the slope on our backs. We heard an iceberg ’boom!’ and some folk in a zodiac even felt the splash of the wave as the icy chunk collapsed into the sea. We saw an intensely blue hole in the side of a massive iceberg. We were overcome with the raw, wild, intense beauty of the place.

And the third kind of magic was hearing stories from our Homeward Bound participants, as we further explored our leadership styles and behaviours, played a bit of “LSI Twister”, and heard just how transformational this journey has already become for some of the women on this voyage.

Magical stuff. I wonder what tomorrow will bring?

Read more about Fern Hames on our Participants page.