How I regained my inner voice: Raeanne Miller

In a beautiful and raw reflective blog, participant Raeanne Miller gives a candid insight into some of her leadership learnings from Homeward Bound and the events of days 14 and 15 of the voyage

Mother Nature spoke to me yesterday. I was sitting on my rucksack, perched up on the snow just above the tide line at Neko Harbour in Andvord Bay, first charted by the Belgian Antarctic Expedition, led by Gerlache, between 1897 and 1899. Kelp gulls patrolled the pebble beach, pecking at remnants of seaweed, squabbling occasionally, and returning to rest. Shards of slowly forming sea ice lapped at the shore, punctuated by small icebergs grounded on the shore. It was day 14 of our expedition in Antarctica. It was also my Dad’s birthday, significant for me as he passed away four years ago.

I suppose I was feeling quite contemplative. It was a silvery grey day, shrouded in low mist which only occasionally permitted glimpses of the impressive scenery behind. We visited Neko Harbour in the late afternoon after a full day of Homeward Bound leadership content, and I was now lost in thought and self-reflection. We had been working on our Personal Strategy Maps to guide us towards our purpose and vision, and I had spent much of the morning turning my vision over and over again in my mind, kneading it and stretching it like dough, shaping and moulding my words to resonate with my newly discovered core values: ambition, enthusiasm, and open-mindedness.

Step by step I walked, occasionally stopped by a boot sinking knee-deep into the snow, or to give right of way to a passing penguin. The mist lifted, and the glacier teetering across the bay came into full view. The front was a 30 or 40 metre high wall of ice, tilting precariously towards the sea below. An otherworldly blue glowed from the deep cracks and caves which had formed as the glacier was pushed slowly off the mountain, crumbling into the sea.

And this is where nature spoke to me. The glacier groaned, a languid rumbling loud enough to catch everyone’s attention. I walked closer, rapt, wondering of any of its off-kilter frozen pillars were about to give way. It cracked, suddenly, and sharply, as if to warn us that it could go at any minute. 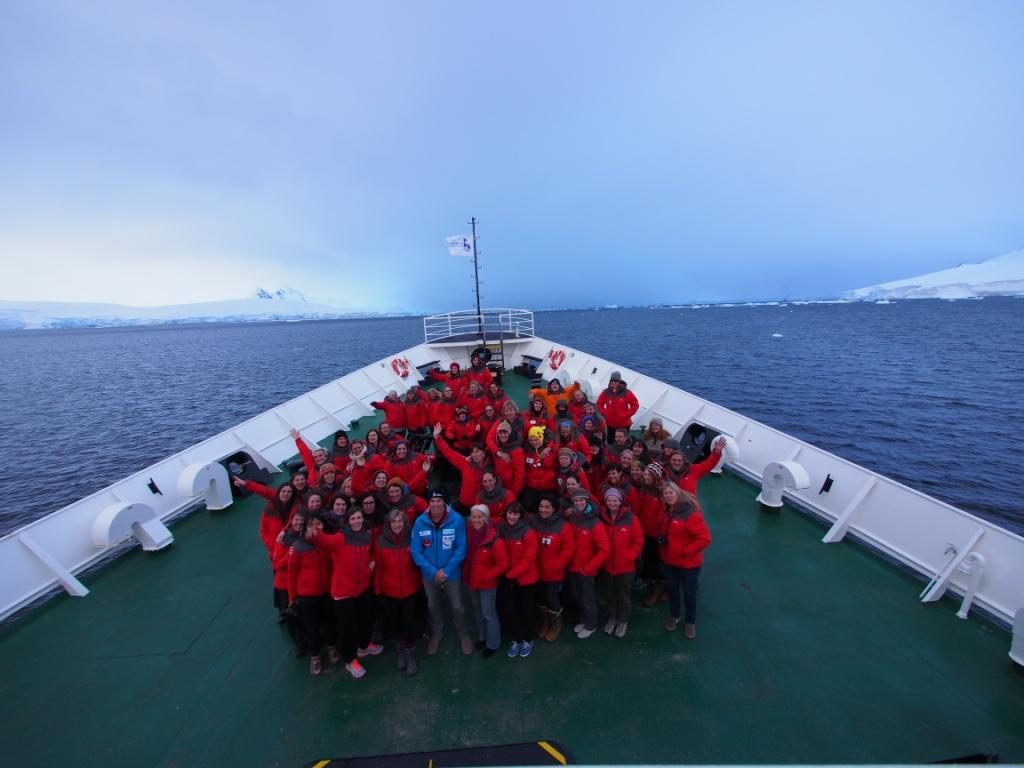 People had previously been swept out to sea at this spot by large waves formed when big bits of glacier collapsed into bay.

It creaked a softer note. I sat down on my rucksack, letting the snow fall softly around me, and waited for the next communication. For two hours I listened. It moaned from somewhere deep within. Would the wall collapse, and crash into the sea? It calmly sighed, invisibly readjusting its weight. I couldn’t take my eyes off it. A loud snapping sound caught our attention – surely that block would fall? Ice dust twinkled and chimed as it showered downwards. Suddenly the solid as ice seemed alive, and had a profound, resonant voice, full of wisdom.

Over two hours, the glacier spoke to me, but not as humans would speak to each other. It uncovered in me an internal dialogue which I had progressively hidden away over the past four years. As the wise old ice growled, whimpered, muttered and sighed, it told me its story. And as I listened, I thought about my own stories. The stories I tell myself, about myself, which don’t do justice to the generous, gracious, and talented person I am, lost somewhere underneath.

You see, my inner voice has become cruel over the last four years. “You’re not good enough”, it told me. “Why aren’t you writing as many papers as your colleagues? Or falling into an amazing job? Or being invited to speak at conferences? Or having any success at grant writing? It’s a competition, and you are losing.” Outwardly, I smile, I work hard, I do my best, but inwardly I felt as if I no longer knew who I really was. Even amongst friends, the voice sniggered: “You’re not clever enough, or funny enough, or interesting enough to speak up, or to crack a joke, or to hold that conversation any longer.” Outwardly, I socialised and joined in where I felt most comfortable, but inwardly I wondered why I no longer felt like I “fit in” anywhere, why nobody really seemed to relate.

This story, the story I told myself, was the wrong one. As I sat with the glacier, quietly willing a block of three or four thousand year old ice to topple and plunge into the sea, I decided my story needed to change. The glacier did not crumble, its sounds merely communicated the complex structure within, shifting with time. My story, too, had shifted, and I needed to shift it back to a more constructive one that served me – the real me. The me that I wanted to be in my work, with my friends, at home, in love, and as a leader.

On one of the first days of our expedition, we did an exercise called “the five whys”, where you question your purpose (“why?”) five times, in order to distil its essence. My purpose for joining Homeward Bound now resonated: “To find my own inner voice first, to enable me to better understand and unite the voices of others.” Later on, the program highlighted just how much energy I had been using to incessantly compare myself to others to see if I stacked up enough to be liked, or to succeed at my job. In my mind, this story of competition and approval had grown and expanded into a wilder, taller, and untrue tale. While I was good at recognising and managing emotions in others, this pervasive story which I told myself about myself meant that I could no longer self-manage, and instead I tortured myself with uncertainty on the inside.

The glacier rumbled, and another cascade of icy shards met the glassy ocean surface, causing ripples to emanate across the bay. The ripples arrived at the pebble beach at my feet like a hushed breath of air, evident only in the floating ice clinking together against the rocks. In that stark silence, the elements of Homeward Bound came together – the personal reflection and questioning, the safe and supportive environment, the coaching and strategy development, the free spirits, and of course, Mother Nature. I had been telling myself the wrong story for too long, and it had to change, there and then.

So what’s my story now? It comes from my ‘visionary goal’, developed over the past two weeks. My goals is to be a thoughtful, purposeful, and trustworthy communicator with an infectious, adventurous spirit. I want to use my skills to “bring a little science into all of our lives”.

Tonight on the ship, we were privileged to welcome the extreme athlete and UN Ambassador for Ocean Health, Lewis Pugh. He told about his adventures, the people he had met, and his efforts to create marine protected areas in Antarctica. For my story, however, and my newfound voice, one thing really struck a chord: “Identify what your limiting beliefs are, and keep pushing them away”.

This is exactly what the glacier had been telling me all along.

Read more about Raeanne Miller on our Participants page.