Minkes to moss: the Homeward Bound science program at sea

Onboard science faculty, Justine Shaw and Mary-Anne Lea, pull back the curtain on the vast knowledge-sharing and collaboration taking place as part of Homeward Bound’s science program and the Symposium at Sea

Ever since leaving Ushuaia and our first Minke whale sighting in the Beagle Channel, science questions have been coming thick and fast! Luckily, one of the key elements of Homeward Bound is science. We (Drs Justine Shaw (ARC CEED, The University of Queensland) and Mary-Anne Lea (IMAS, University of Tasmania)) launched the onboard science program with a visit to the Argentinian Carlini Base on King George Island where the Argentinian and German (AWI) scientists and divers were very keen to share their experiences and scientific insights with everyone and happily fielded a multitude of questions.

Justine, Mary-Anne (and Jess Melbourne-Thomas, in absentia) have delivered specialised lectures onboard to contextualise their collaborative Antarctic experience. Justine has brought the terrestrial biodiversity of Antarctica into focus, highlighting remarkable adaptations of species such as mosses, lichens, algae and tiny creatures like tardigrades and mites which endure the harsh environment of terrestrial Antarctica year round. Justine was ecstatic to see that the expeditioners are taking in her teachings, with people passionately observing weird fleshy black lichens (Umbillicaria spp.) hanging off some exposed rock spires at the top of steep snow slope walk yesterday. 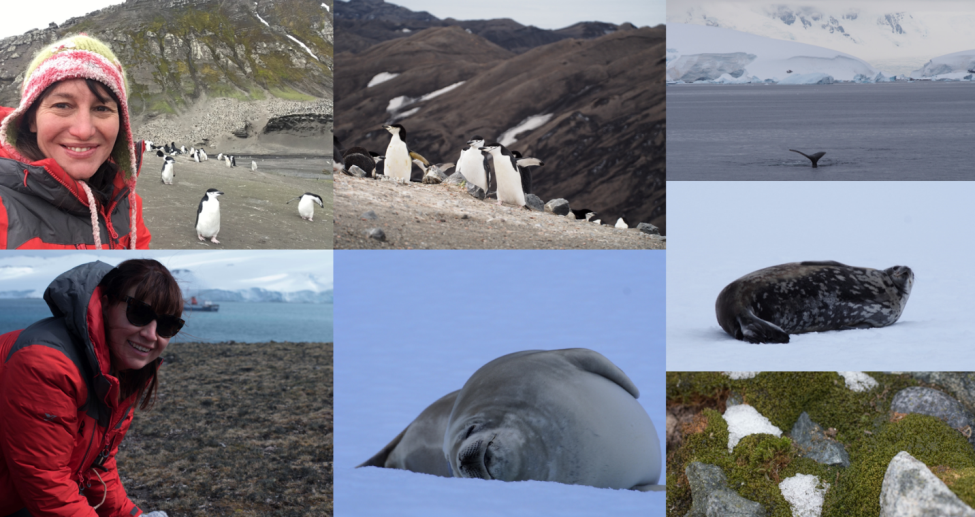 Mary-Anne has enjoyed opening the eyes of participants to the marine ecosystems around them and how the complex interactions with ocean and atmosphere processes influence the animals living within the ocean. Our wildlife sightings at sea an on landings of the highly adapted Southern Ocean wildlife, such as humpback and Minke whales, Kelp gulls, Antarctic skuas, Snow, Cape, Giant and Wilson’s Storm petrels, Snowy sheathbills, Blue-eyed shags, Gentoo, Adélie and Chinstrap penguins, Antarctic fur, Southern Elephant, Weddell, Leopard and Crabeater seals, have helped to cement the science program content and literally bring it to life.

One of the highlights of the science program so far has been the Symposium at Sea – a chance for all participants to share their expertise and learn from each other, with a view to enabling future collaborations. Each Homeward Bound participant was given three minutes to captivate their audience with their vision or findings. Speakers have been encouraged to try and deliver information in a way that targets all learning styles in the audience.

We’ve heard about people’s work and research on a wide range of topics such as: developing cures for malaria; enhancing wind farm infrastructure to promote marine biodiversity; the benefits of educating children about science; developing solar technologies; nanotechnology innovation; the importance of microbes in our oceans; managing National Parks for climate change; to name but a few. The panel sessions that follow have been filled with questions, animated discussion and positive and constructive feedback. At the end of each session tips on delivery strengths and weaknesses, where and how speakers could improve their delivery to have greater impact and reach are given. Everyone has been encouraged to listen to and learn from all the speakers and think about where they see opportunity for future collaboration. At the end of the Symposium at Sea there will be a structured session exploring how these collaborations might emerge and how to enable them.

This immersive experience has given the 76 women an in-depth understanding of the complex processes at play within the unique Antarctic terrestrial and marine environments, setting the scene for the targeted lectures which will follow on global change, human impact, and climate and policy frameworks. Many of the women are often seen in deep discussion on how they will now incorporate the science program learnings into their work at home and emerging Homeward Bound collaborations.

Read more about Justine and Mary-Anne on our Faculty page.