On day 16’s visit to the U.S. base, Palmer Station, participant Carol Devine shares the fascinating science, a shared mission for the Earth and Palmer’s “world famous” brownies recipe

It’s a beautiful clear morning out there with a pod of lovely unique-shaped pale blue icebergs, a juvenile leopard seal on sea ice and a small blue-painted research station in the near distance to our ship.

Bob and Randy from Palmer Station brought the generous spirit of the Palmer Station to the MV Ushuaia early this morning for our briefing. Palmer is a US research station on the Antarctic peninsula, built in the 1950s south of Anvers Island, which Randy said “is a unique location to study the polar marine environment. As such, most of our research focuses include marine biology and oceanography but we do also have a number of term research projects, geophysiological, atsmospheric and meterological.” They also do a lot in the area and use a fleet of small zodiacs to travel within a short radius of the station and the zodiacs have winches, oceanographic equipment, able to deploy nets to collect plankton or krill, to do water samples. They also do chemical ecology, polar entomology, fish physiology studies and education outreach. 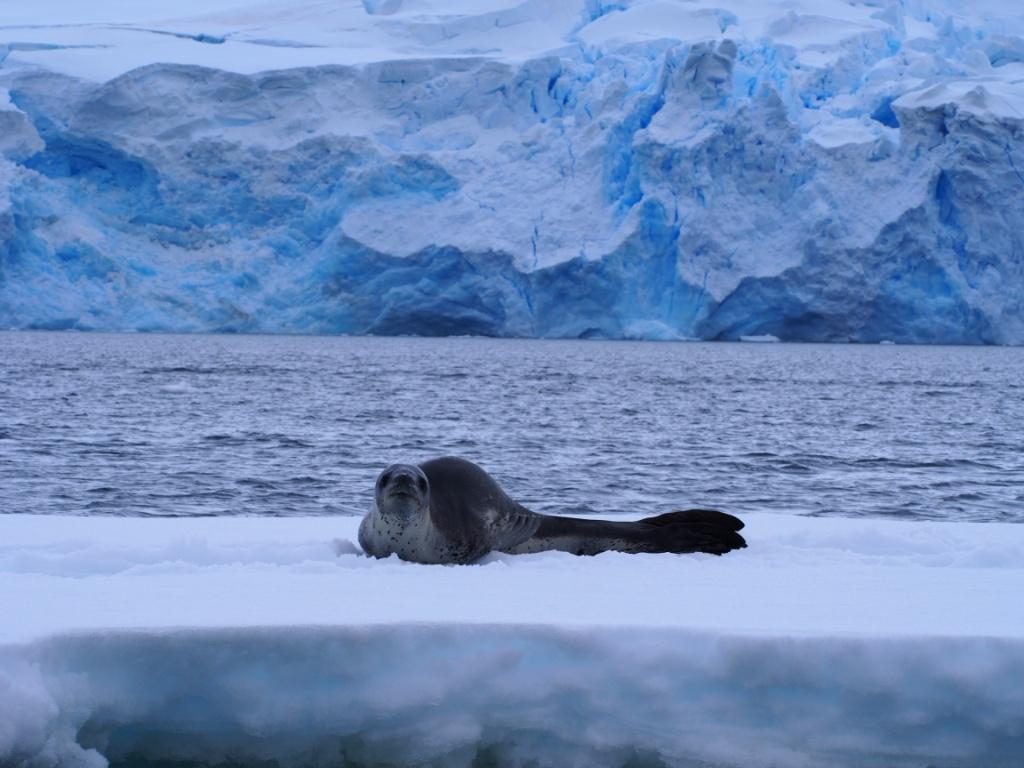 For me, their ice fish studies are particularly interesting because these fish are the only vertebrates with no haemoglobin and have white blood versus, for example, the rock cod that has red blood like us humans. Researchers use genomes to look at changes in the genes between the two fish species and try to compare with the human genome to see if there are potential ways to tackle osteoporosis. Long term ecological projects funded by the National Science Foundation and especially about polar marine environment at Palmer Station are looking at bacteria in the water and penguins, seabirds and whale studies.

Their local observed changes project is super interesting and also distressing. For example, the team has studied but also observes how the glacier in Palmer’s “back yard”, as they called it, has receded significantly. “It’s much bigger now,” as islands appear and glaciers break off.

These such facts and locally observed changes are of deep interest to us on Homeward Bound too, because we want to act fast and collaboratively to study, advocate about and stop the pace and rate of climate change.

Randy also mentioned new studies of penguin populations with the advent of satellite where darker spots were observed on icebergs. Now scientists can also look at satellite imaging to understand penguin population sizes and migration. He said notably the Adèlie penguin population is declining significantly whereas Chinstrap and Gentoo seem stable and growing. The Gentoos are heartier than the Adélies, he said, but climate is a factor.

At Palmer Station we were very warmly welcomed by the small team – it was an inspiring open discussion with what I felt was meaningful and mutual exchange about our shared concerns but also optimism for these times both for women in science, climate action and leadership and responsibility in a time when it is seriously needed. I left feeling the US Antarctic Science program is healthy, significant and the scientists and full team at Palmer is collaborative, smart, committed and hardworking.

The waste manager said, “We only have one planet”.

The Palmer Station chef Brian and his sous-chef Bridget’s “World Famous Palmer Brownies” were out of this world – here’s the recipe. Enjoy with coffee or tea.

Melt together the butter, 1 pound of chocolate chips, and the unsweetened chocolate in a medium bowl over simmering water. Allow to cool slightly. In a large bowl, stir (do not beat) together the eggs, coffee granules, vanilla, and sugar. Stir the warm chocolate mixture into the egg mixture and allow to cool to room temperature.

In a medium bowl, sift together 1 cup of flour, the baking powder, and salt. Add to the cooled chocolate mixture.

Toss the walnuts and 12 ounces of chocolate chips in a medium bowl with 1/4 cup of flour, and then add them to the chocolate batter. Pour into the baking sheet.

Bake for 20 minutes, then rap the baking sheet against the oven shelf to force the air to escape from between the pan and the brownie dough. Bake for about 15 minutes, until a toothpick comes out clean. Do not overbake. Allow to cool thoroughly, refrigerate, and cut into 20 large squares.

We headed back to the ship for lunch and afternoon science lectures by Justine Shaw and Mary-Anne Lea, our resident science faculty.

The formal program closed off with Elvira Polodzanska, our fellow Homeward Bound participant, who works for the Alfred Wegner Institute in Bremen, Germany, talking about the International Panel on Climate Change (IPCC) reports, the second working group which she is involved in. As Justine, one of Homeward Bound’s science faculty, said earlier this afternoon, Elvira reiterated that climate changes in Antarctica and elsewhere around the globe are not uniform.

She shared that the IPCC has useful public messages about climate change in a language we can use and share with our stakeholders, families and colleagues. The impacts are widespread, warming of the climate system is unequivocal.

Each of the last three decades successively warmer at the earth’s surface than any preceding decade since 1850.

What temperature the world will warm to by the end of this century comes down to climate policy, said Elvira.

Policy counts on us scientists, citizens, voters, neighbours and communities. The future is in our hands and, as our friend at Palmer said, we have one earth. 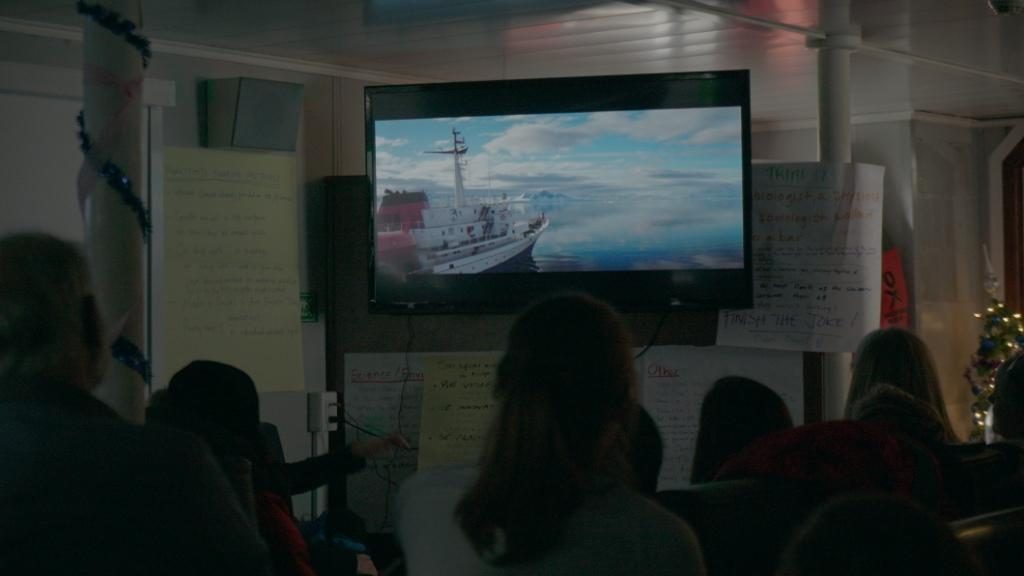 Homeward Bounders watching drone footage of their own journey on the MV Ushuaia, taken as part of the documentary project – image by Kess Broekman-Dattner

Speaking of which, the night ended with Dale of the film team showing us a snippet of drone film footage he’d taken in a few locations we’d visited in Antarctica. This place – Antarctica – is both ecstatic and innocent beauty that you feel in your stomach when you see it as an Arctic tern may see it from above. How could Antarctica possibly be more beautiful from any angle. It was an ethereal feeling to watch the few minutes of film showing what we’d witnessed, but from another perspective. We gasped at the beauty. Our tears of joy, love and honour of Mother Earth dropped into our laps and onto the ship floor and maybe into the Southern Ocean water that eventually circulates around the world and sustains us.

Read more about Carole Devine on our Participants page.