It’s been a year since our first Homeward Bound cohort of female scientists departed for Antarctica. Between the anniversary of the first voyage and the departure of the second on 18 February 2018, we’ll be sharing the stories of our inaugural participants and their journeys, in their own words, one year on. Their stories put faces to the facts about women in leadership, women in STEMM and what’s happening to our planet. Follow the stories on social media using #HBStories.

It’s just over a year since we were in Antarctica, on Homeward Bound. As I sit here in sunny Melbourne, it seems a world away.  And yet Antarctica is in my very being now; it is always with me.

As we celebrate the anniversary of our voyage, and also watch the next cohort preparing to depart, ‘Homeward Bounders’ are having catch ups, sharing photos, lending gear to the next team, reflecting on our journey, reflecting on this past year. I’ve been reflecting too. 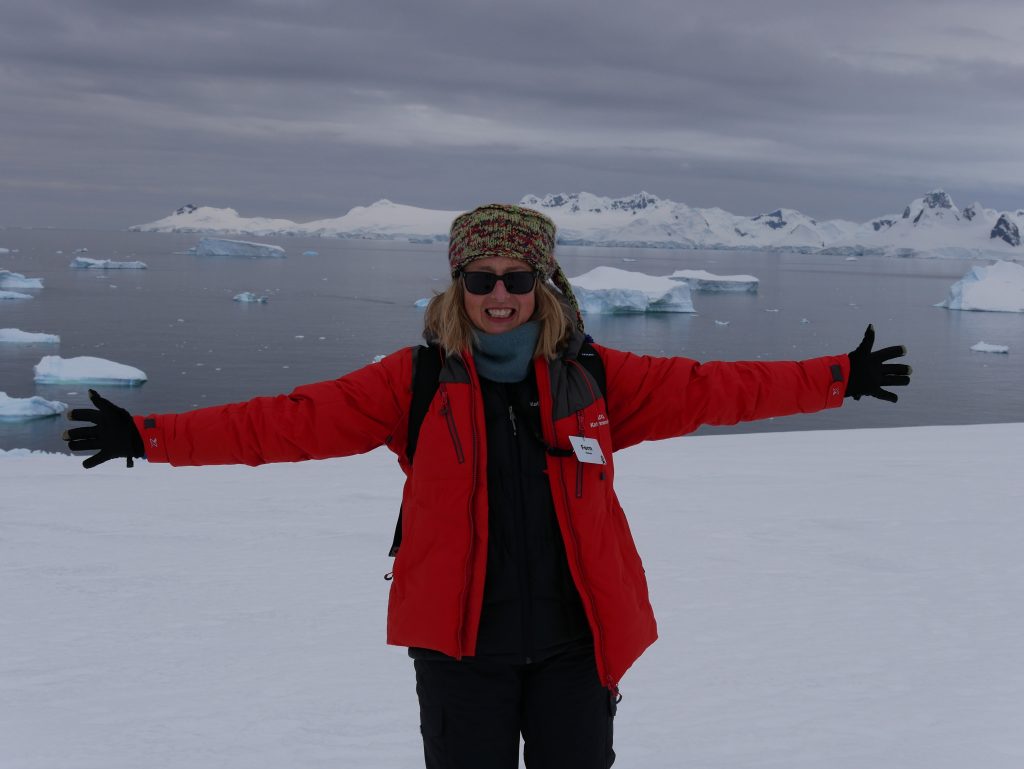 HB aims to grow the voices of women in matters affecting the planet. It’s a big, bold claim – so how did we go, with our inaugural team? Have our voices grown? Are we better leaders, and what else has changed?

Before Homeward Bound, I felt like I knew a little bit about leadership; I’d read an awful lot, practiced quite a bit, done a bunch of leadership programs and courses, completed a Grad Certificate in Rural Leadership… And I expected to be challenged on Homeward Bound. I felt that my own leadership faltered a bit when I was under pressure; Maslow’s Hierarchy of Needs is a powerful thing. I knew I wasn’t at my best when I was fatigued, or famished, caffeine- deprived or time-poor… How to build some robustness into my leadership so I could be a better leader even when things got tough? I thought HB could help me with that; on the voyage I would be fatigued, surrounded by strangers, and I could be pretty sure there’d be some behaviours which would be a challenge (76 women, on a ship, with no ‘escape’, for 3 weeks…). Because none of us are perfect. I know I’m not, and evidence suggests you might not be either. There were bound to be some things which would challenge each of us, at some point. I was interested in how I, and others, would respond to this. I wanted to watch and learn.

There were a bunch of women on the ship who seemed perfect, but they probably aren’t, either. One of the joys of HB is that these extraordinary women (both the wonderfully flawed and seemingly flawless) are now part of my network. I have suggested them as members of panels or as presenters at conferences. We have written papers together and created collaborative projects. We have shared advice, ideas, long lunches and dinners and meandering conversations and plotted how to save the world. I’ve read and shared their research, laughed and cried at their FB posts, cheered at their science/ comedy performances in the pub, and offered up my home to their travelling friends. We are all the richer. And we are all lifting each other’s voices. 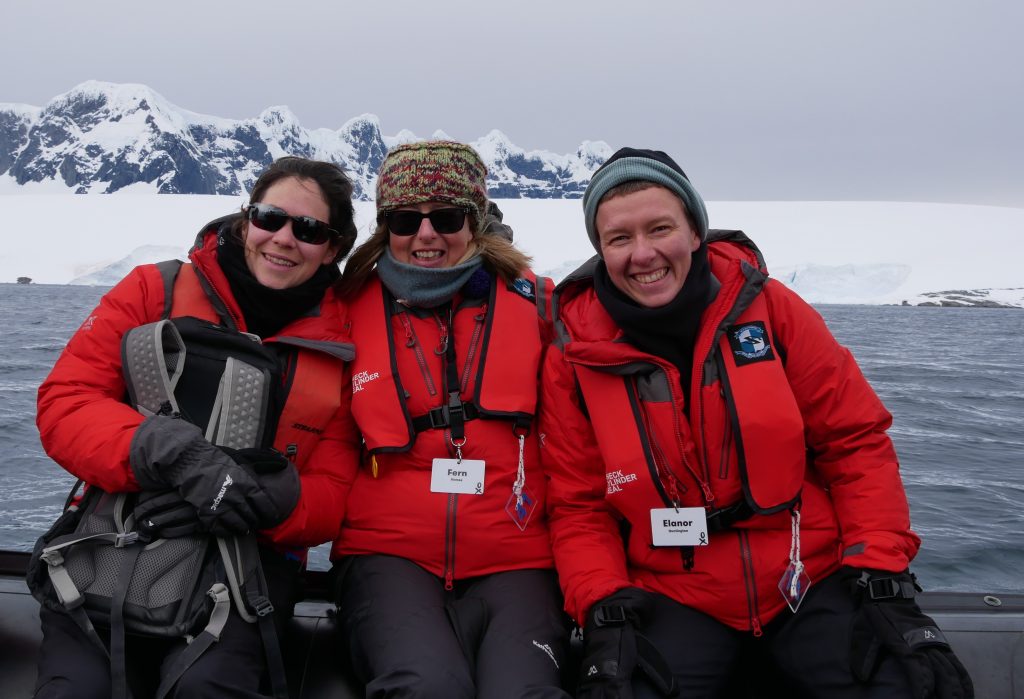 In Antarctica I thought a lot about the leadership of people like Scott and Shackleton. And how Amundsen got ‘the prize’ (first to the Pole), but his legacy is nothing like Scott or Shackleton’s. The exemplary leadership of the ‘S’ men is all about how they led; how they treated their colleagues, their level of respect, their resilience, their integrity and their commitment to wider goals. Their legacy is powerful. I want to hear women’s names with such powerful legacy. I don’t want them to have to endure what those men did, but I want to hear the names of women spoken of with the same awe, respect and recognition of their leadership and the contributions they have made. I am in awe at the achievements and wise leadership of many of the women from Homeward Bound and I want my grandchildren (if such a thing happens in the future) to know the names of Barbour, Barnard, Charnaud, Davies, Fitzgerald, Hardesty … (in alphabetical order and just a few off the top of my head; no favourites here!) for those things.

So has HB grown the voices of women in science, in matters affecting the planet? I think about this in radiating ‘onion’ layers; the inner layer is my own voice, then those of women around me, and those in HB more widely. For me, yes my voice has grown. HB gave me a platform; everyone wants to hear about Antarctica. So simply being part of HB gave me a chance to demonstrate that I had some ideas and things to say, and could articulate them well. That visibility led to a raft of new opportunities, responsibilities, connections, linkages and a widened circle of influence. I have had substantial opportunities to lead at my own Research Institute, as Director (which means I can shape how we operate and the influence we have) and I have definitely done this more actively, purposefully and thoughtfully than I have in the past. The visibility led to awareness and recognition of a host of other things I do and being awarded ‘2018 Citizen of the Year’ in my local government area. I’ve definitely seen multiple examples of the voices of women in my HB team growing, all around the world, and it’s an exhilarating thing to witness. And it gives me hope; for their communities and for the places and fields in which they have influence.

The program helped me deepen my thinking about a few things, particularly in regard to strategy, leadership and visibility. I didn’t expect to come away with things suddenly different; I know that programs like this take time to absorb; we take time to process them and practise applying things we learn. They say a program like this might deliver 30% of learning but 70% of the learning comes over time as we subsequently learn, apply, refine, apply…. I feel like it took me quite a while to process HB; Antarctica is so gobsmackingly absorbingly awesome, and I didn’t get time on the ship, but things have percolated through over the past year. My voice has grown, my visibility has grown, my opportunities have grown; my influence has grown. I expect that to keep growing. I expect I will keep learning from my own experiences, from the extraordinary network of HB women around me, and from each new successive cohort of HB women. I’m committed to keeping connected with HB as I genuinely think this is an exciting, evolving thing. There are new things to learn every year, and I can keep returning to Antarctica, vicariously, every year too.

Bon voyage to those about to head off on HB18. Don’t expect to suddenly be a better leader or have a powerful voice; watch, listen, ponder, let it grow on you, so you can grow, and our collective voices can grow too. But don’t take too long to step up; the need is more urgent every day.

Fern Hames builds links between the research programs at the Arthur Rylah Institute for Environmental Research and between the science, research partners and the community. These links mean that ARI’s applied research can truly help guide biodiversity action and underpin policy decisions. Fern has three decades of experience across freshwater fish and aquaculture research, policy development, stakeholder and community engagement, environmental education and citizen science. She was a founding member of the Jane Goodall Institute Australia and has volunteered in Tanzania, Pakistan and Myanmar. She’s a member of the Homeward Bound Leadership Team and was named 2018 Citizen of the Year by the Murrindindi Shire Council, her local community. She is passionate about wild places, and about connecting people with nature.

You can read more of the #HBStories from the inaugural cohort on the HB Blog.