The ship has left Ushuaia, Argentina, for Antarctica, carrying the 78 women in STEMM who form the second Homeward Bound cohort. Before, during and after the voyage, we’ll bring you the stories of more than 20 of those women, in their words and pictures: our #TeamHB2018 correspondents. You’ll hear from them about how the past 12 months of working together has influenced them. You’ll get a visceral sense of life on the ship as we post stories crafted from some of the most remote and fragile parts of the planet, by some of the most talented women scientists on the planet. And you’ll hear what happens for them when they return.

Our sixth correspondent, Sandra Guzman, PhD Student and Climate Activist, is the first female Mexican scientist to visit Antarctica. Homeward Bound’s leadership training has helped push her forward, identify opportunities to meet world leaders and given her courage to raise her voice.

Homeward bound has changed my life in many ways. When I first heard about it, I thought, what a powerful combination – taking women leaders to Antarctica to talk about solving problems such as climate change! I had a feeling in my heart that it was for me and I applied, with the conviction that I could contribute to the project, and that this project could contribute to the world.

When I received the news that I was successful, it was absolutely unbelievable! I am one of the 78 scientists on board, one of the 6 Latin-Americans and the FIRST Mexican!

I consider myself a strong and committed woman, but I won’t lie, in my life I have suffered some deeply sad moments, such as the departure of my mother. My mom gave everything for me and for my brothers and on her memory I have been fighting hard to get where I want and protecting the planet is my commitment.

When I began studying issues relating to climate change I realized this was one of the biggest threats humanity is facing. After more than 23 years of international discussions, we are still far from solving the problem. That’s why, when I saw the Homeward Bound’s call “mother earth needs her daughters”, I identified. It is time for women to take the lead in this fight and to do things differently.

Homeward Bound’s vision to consolidate a global network of 1000 women scientist from all around the world is so important, because climate change is a global problem that needs global solutions and local actions.

My Homeward Bound journey has strengthened my commitment to the planet and challenged me in many ways. Working on my visibility, has led to alliances, articles and interviews in scientific magazines, newspapers, TV, digital media, and others that helped me to reach more than 50,000 people in Mexico and beyond. 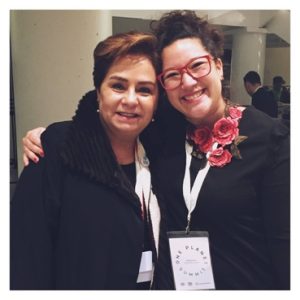 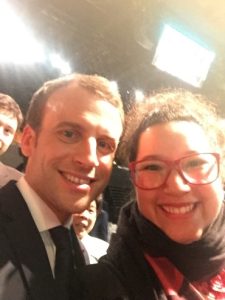 As part of this journey I’ve worked on my courage, learning to raise my voice. It worked! I’ve had the amazing opportunity to talk about Homeward Bound with women I admire such as Christiana Figueres and Patricia Espinosa, and also with the President of Mexico, Enrique Peña Nieto. Incredibly I met the President of France, Emmanuel Macron, whom I had the honor to greet and congratulate for his leadership on the climate agenda.

I’ve learned that, as women, we have a voice that we need to sound louder, not for antagonism to men, but because of the faculties and capacities we bring to leadership and problem solving.

Homeward Bound has given me the opportunity to rethink the role we have as women, and to see the potential we have together. It is so important to strengthen each other, as the Homeward Bound campaign says: #StrongerTogether!

I think that we are not superwomen, but we are women doing super things!