CEO to CEO – It is Time to be Part of the Story, Not Apart from It: Musimbi Kanyoro

What does a drop in the ocean mean for you? Something small? Insignificant? I think about this a lot. Once upon a time big change came from powerful leaders. Now it is coming from many places and many people.

As a CEO of large organisations for some time, it has been clear to me that the opportunity given to senior leaders to open the pathway for change is immense if you are willing to let others share the leadership. It was apparent to me on the Homeward Bound expedition, as I could see how so many leaders were enabled by being brought together to illustrate the collective possibility of bringing greater change to our planet.

I believe that leadership is both action and reflection and it is a long-term race. It requires collaborations. There are many benefits for a leader to do this  ̶  to learn to accommodate diverse ideas and people to move ahead with much more sustainable solutions that apply to many people and places.

I spent several weeks in Antarctica with 100 women with a STEMM background, chosen from some 36 nationalities and as many sciences, to be part of Homeward Bound, a ground-breaking global leadership initiative for the greater good. I am reminded of an Ethiopian saying, “when spiders unite, they can tie up a lion”. These women are leaders in their own right, and they are working, listening, learning and committing to being in a collective space, in preserving the heritage of our world.

When you are in Antarctica ‘a drop in the ocean’ has many meanings. Clearly, that is what we are, a tiny spec of humanity on a ship in a very big space where Mother Nature rules. But also, I think about how oceans are formed, so many drops of water that come together as an ocean. This is what I saw happening on the ship with the women.

In Antarctica the cost of climate change is very apparent, even though the whole is still largely untouched by human hand. Since experiencing Antarctica, we are all in awe of this place and that it is worth protecting. We are also all very aware of, open eyed to, what is happening in our own backyards, in our countries, institutions, and our own lives.

There were moments every day where we were stilled in our shared joy of this beautiful landscape. It deserves to be whole. We saw the many animals that go there in summer to feed on the mass of krill, reproduce and then leave.

At the same time, it is not impossible to see how this wholeness is endangered by what is happening in the world at large. We have learned about the retreat of the glaciers resulting from global warming, the movement south of Adélie Penguins for whom the northern end of the Antarctic Peninsula is increasingly not cold enough, and about the risk of contamination resulting from the exploding tourist industry.

We also now comprehend, as only this shared time can enable, the significant cost to the world itself as this frozen land changes. For me, as an African leader, it was a realisation that if we do not preserve this place, if we do not value its wholeness for Mother Earth, then the lion in the Okavango in Namibia will suffer with the sea lion in Antarctica, the elephants in Amboseli in Kenya will suffer with the elephant seals that inhabit this frozen wilderness. 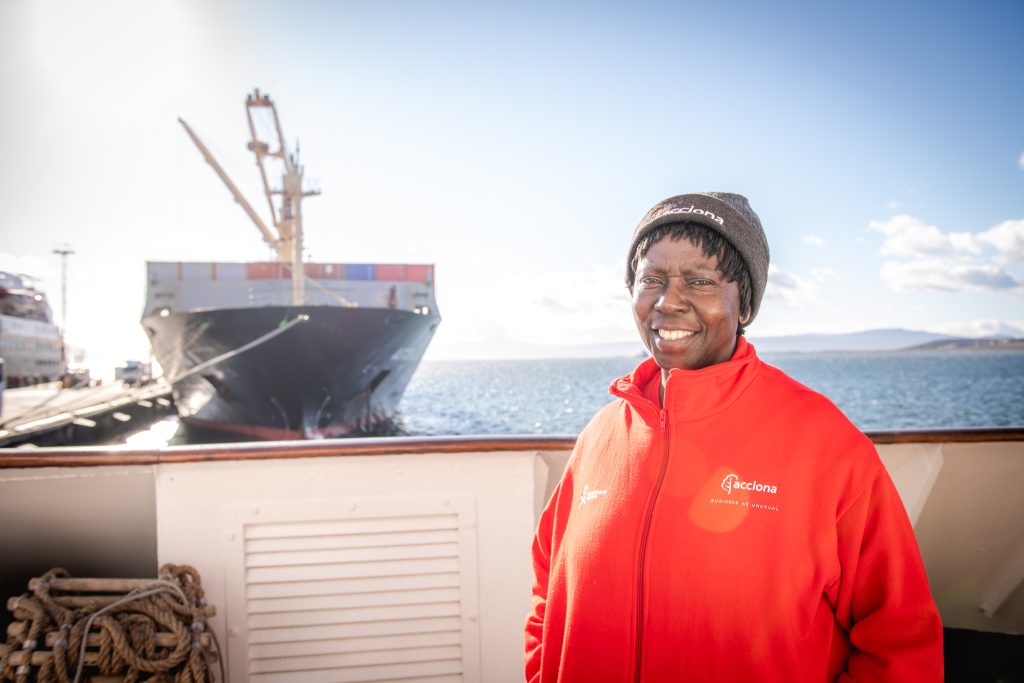 Musimbi Kanyoro onboard the Hebridean Sky as part of the Homeward Bound 4 voyage to Antarctica. Photograph: Will Rogan

I have become much more focused on my legacy; not just to be known as someone who has led global organisations, but to be recognised as a woman and a leader who has a responsibility and duty to care for the health of the whole.

In Homeward Bound, I became more and more focused on sharing the long-term experience of leading with courage and vision with participants, while at the same time learning so much about what they do, their body of knowledge, expertise and training that can help heal our world and protect the land and sea species for future generations.

At the same time, it was very clear that the gender bias at work is alive and well. A significant percentage of these women struggle to have voice and so are unable to fully demonstrate their skills as leaders. We must find ways to get rid of gender biases. As Fabian Dattner, the Co-founder of Homeward Bound says, “Women leading in large may be the single most important contribution that can be made towards a sustainable future”.

If we don’t deal with the biases the world will be poorer without the contributions and wealth of knowledge that these incredible scientists bring.

Climate change and global warming are huge issues for which one solution and one form of wisdom is not enough to sustain the 1.5 warming that the United Nations Framework Convention on Climate Change is suggesting. Yet that focus is reachable through many actions.

To me, it is important for leaders to understand there is a lot of knowledge for us to rely on  ̶  so many people are studying our world and its creatures  ̶  but what I think we need to pay attention to is what is getting in the way of responding to the science.

This has been the most significant lesson from 19 days of travelling together  ̶  faculty and participants. There was knowledge shared amongst us all and significant self-discovery by many on the boat that they could do more or do differently.

And best of all, are the many new commitments to go out there and own our leadership as women.

In some ways what I watched and was part of is a leadership laboratory. I think it is one that has produced an incredibly successful outcome. Now we need to see this in the world influencing our global structures and decisions.

This style of leadership that is skilled enough to have impact must be more than a drop in the ocean. It requires governments and businesses to act differently; for communities and movements to create more knowledge; for solidarity with people, standing with each other.

Leadership at this time is also required to support people going through the pain of losing their sense of a positive future. Anxiety is widespread. There are things we can do, small or big to affect change.

Antarctica has spoken to me…. we are such a small thing in this ocean. We can be supported, and we can be roughed up. We must realise that we can try and do things to help the vulnerabilities we see, and we must also recognise that if we don’t, we will continually destabilise the root of nature and then ruin the only possibilities we have.

Kenyan human rights advocate Musimbi Kanyoro is the former CEO and President of the Global Fund for Women. Prior to this appointment, she was the first non-white CEO of the World YWCA in its 150-year-history. Musimbi serves on numerous boards, including the UN Women Civil Society Advisory Board and the World Bank Gender Advisory Board.