#TeamHB6’s Moreangels Mbizah is the Founder and Executive Director of Wildlife Conservation Action. She is works at the intersection of conservation and community development. Moreangels received her Doctoral Degree in Zoology from the University of Oxford, UK, where she studied African lions. Her work on lions was featured in a National Geographic short film One Woman’s Remarkable Journey to Protect Lions.

Moreangels is a consultant on various projects on conservation and community development in Zimbabwe and across Africa. She is also a Mandela Washington Fellow and is passionate about inspiring and mentoring Africa’s next generation of conservation leaders.

1. What is some of the best leadership advice you have been given… or that you have to offer personally?

The leadership advice I can offer is that as a leader you should always let your team know that they will always be seen and be heard. That way they will constantly bring their very best to the table each and every day. When a team feels valued, they will deliver their best.

2. What do you believe is the biggest problem the globe and humanity is facing?

The biggest problem facing the globe and humanity is loss of biological diversity. Our lives are intertwined with all life on earth and a loss in biodiversity directly affects our lives. About 100 years ago the lion population was about 200,000 but today there are less than 20,000 lions remaining in the wild. At this current rate it is feared that the lion will go extinct by year 2050. These threats, which are affecting lions, are also affecting other species, and as many as 30 to 50 percent of the planet’s species may go extinct by 2050. There is a need for us to act now and act efficiently to halt population decline and increase biological diversity.

3. What are you most proud of in your current work/project/life?

I have always believed that my purpose on earth was to help people. And when I got a chance to see wildlife and to be in the bush, I then decided to choose a career in conservation because I became aware that I was passionate about protecting wildlife and I wanted to do that for the rest of my life. But I was not certain if I would still be able to help people as much as I wanted to.

I am so proud that through this work we are reducing human-wildlife conflicts and as a result we do not only help protect wildlife but also help protect and enhance community lives and livelihoods.

4. How different are the environmental issues facing Zimbabwe and Africa compared to other parts of the world, and how do you go about making those issues visible?

The environmental issues facing Zimbabwe and Africa are mostly the same issues facing other parts of the world. Because of our developing economies these issues affect us the most because we might not have the resources to deal with them – take for example environmental pollution. And with climate change Africa is already facing the full brunt of its effects, our temperatures were already high and if they continue to rise it becomes more difficult for families to grow their food, and we also start to lose our wildlife populations.

5. How do you see your community approach to protecting lions being applied globally?

It is very important that we constantly remind people that we are all responsible and have an important role to play in the protection of lions and other wildlife species that we love so much.

We are the “community” and if we want to see lions in the wild, if we want our children and great grandchildren to see lions, then whether you live in the USA or in the UK or live alongside them in an African village, you have to be involved in their protection.

This can be done in various ways including donating to conservation organisations, visiting wildlife areas and contributing through tourism as well as sharing constructive information about wildlife protection and how humans and wildlife coexist, so people can understand the complexity of protecting lions in human-dominated landscapes.

6. What is it about lions in particular that makes you so passionate about conservation?

Lions are just majestic, they are beautiful and are the king of the jungle. I am passionate about protecting lions because they play such a critical role in the protection of other wildlife, the vast habitats and entire landscapes. Lions play an important role in the ecosystem, they are keystone species and if we lose lions the entire ecosystem could collapse.

7. How do you suggest we go about encouraging other young girls like yourself to become leaders in STEMM? What advice do you have for them?

You should believe in yourself and the amazing talents and gifts you have. Step out and take the leadership roles in STEMM, there is a lot you can and are able to give, much more than you imagine. There are young girls out there who need someone to inspire them and that person could be you. The world needs, and could do better, with women leaders in the STEMM field. 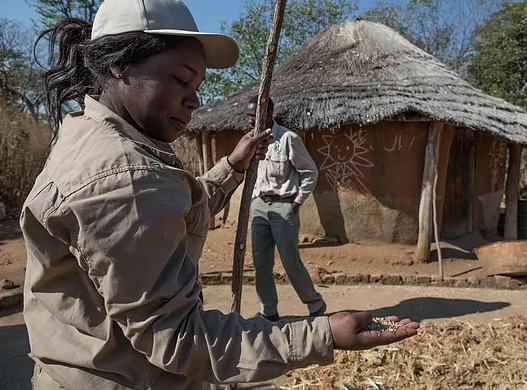