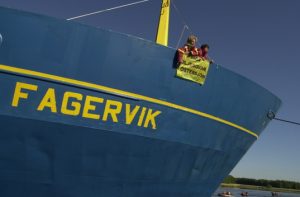 Greenpeace activists blocking the freighter MS/Figaros, previously Figaros, in the port of Norrkoping, Sweden. Activists demanded that the Fagervik is immediately taken out of traffic on the Baltic Sea since it is responsible for dumping a large amount of oil in the sea. In the image, one of the GP activists displaying a banner that reads: “Stop Corporate Criminals”.

In June 2002 Liz Rickman took her turn as a peaceful Greenpeace protestor chained aboard the M/S Fagervik at the Swedish port of Norrköping. Protestors had earlier delivered a letter to the Captain asking for an explanation of how and why the ship had dumped oil into the Baltic Sea some weeks earlier.

When police boarded the ship and cut through the chains, taking Liz and two companions into custody, she was calm and felt assured that the “normal process” would follow. But it didn’t.

Liz and her colleagues were held in solitary confinement, detained on suspicion of aggravated trespass, refused access to Greenpeace lawyers, and told their imprisonment would be indefinite.

“Oddly enough, it was one of the most special experiences of my life. It didn’t feel like that at the time, though it became something very special, not because of what it was to other people, but what it was in terms of the internal experience.”

Following the crew members of Greenpeace being held in solitary, shipping contracts that were held by the Fagervik were withdrawn, and some time later legislation was adopted to help protect the nearby waters from oil spills and dumping.

Watch an interview with LIz about her prison experience:

Liz is an Integrative Medico with an interest in environmental illness. For many years she voyaged with Greenpeace as ship’s medic/activist with involvement in actions including North Sea Oil drilling, oil dumping in the Baltic, leading to her imprisonment with other Greenpeace activists in 202, nationwide protests, and legislation changes.

She was also involved in the early days of the first feminist women’s health centre in Australia. She was one of the founding members of the Australian Lesbian Medical Association (ALMA), and part of the seven-year struggle for ALMA to gain special consultative status with the UN Economic and Social Council (ECOSOC).

Earlier this year Liz and colleague Sarah Burrowes spoke at the UN’s Commission on the Status of Women 65 NGO Forum on Women Covid and Climate, and the Role of the Small NGO, profiling the role of a climate subcommittee as part of an NGO, and reviewing its work in the context of ALMA, and the role it can play in linking with peak bodies and in particular keeping climate justice Issues on the table. They also spoke in another forum on Women and Climate and the role of the Health Sector.

Of course, Homeward Bound had many questions:

What is some of the best leadership advice you have been given?

When I was working with Greenpeace, my campaign manager advised me that as team leader your most important resource was your team. She said if you have people, you will source the material things you need to fund the campaign, so look after your team, take care of them.

What do you believe is the biggest problem the globe and humanity are facing?

Externally, Climate Change and the degradation of the Environment with loss of Biodiversity and Ecosystems. Internally,  the biggest problem facing humanity internally is our own limited attitudes.

What are you most proud of?

Externally: that I had a chance to stand for what I love and value by working with Greenpeace and doing prison time for it. And my commitment and faith in the work of creating social change. Internally: that I am doing my best to work on my own attitudes.

What was your main goal coming into Commission the Status of Women on Women Climate and Covid meeting?

In a conference setting dedicated to the issues of women, and there are many, and the trauma of Covid, I want the big picture of Climate, Environment, and Sustainability to be present too. In another sense, never forget who and what sustains us … the Earth, and our relationship to it.

What do you believe is the important role women will play in the fight against climate change?

The campaign leader who I worked with took the time to ensure I learned her style of leadership which was a cooperative style. The heroics driven by machoism have led us in many ways to the “heroic” leadership style of our culture, along with the ideas of infinite material growth and endless supply, all of which are having a destructive impact on our planet and its life. A cooperative style of leadership not only fosters diverse and balanced opinions but parallels a cooperative style in our culture, consideration of the other, rather than triumphing over the other, the “other” often being the minorities in our human cultures, other species, and the planet itself.

What’s some advice you’d give to the younger generation that’s preparing to pick up the activism banner?

No action for good is ever wasted, so don’t give up. Not only is there real hope here, but each action carries out into the world, and we may not see where and how it lands, but it travels.