In May this year #TeamHB3’s Lorna Slater was elected to the Scottish Holyrood Parliament as a Green’s Party MP. Soon after, in a show of collaboration and commitment to tackling climate change, Lorna and Green-party co-leader Patrick Harvie brokered a cooperation agreement between the Greens and the Scottish National Party Government which saw them both take on Government Ministerial positions. Lorna is now Scotland’s Minister for Greens Skills, Circular Economy and Biodiversity.

“Bringing the Greens into government in Scotland, as governments have done in various countries around the world, is certainly a step-change in approach.  I think we are a clear and visible signal of a change of direction. It is up to us to deliver substantial change, although we have to try to do a lot within the context of having very limited devolved powers to do so. Many key matters such as oil and gas extraction, grid infrastructure and most taxation, we don’t have powers over, and are dependent on the UK government doing the right thing, which I don’t have any confidence in at all,” she says.

Lorna says there is cross-party support for action on climate at some level, but outside of the Green party, there is a lack of general understanding about both the seriousness and imminence of the climate crisis, and the urgency and scale of the changes that need to be made.

“Some parties think that a ‘hands off’ ‘let the free market sort it’ approach will be enough, some of us think that significant government intervention is required; while we generally agree on the direction of travel we are not at all agreed on the pace, mechanisms and scale of change required. There is still a lot of work to do on changing the context about what we are dealing with and what will be needed.”

In an article with the Scottish political magazine Holyrood, Lorna spoke of the impact the Homeward Bound program and seeing the effects of climate change in Antarctica first hand had on her.

“You can see bare rock where there should be ice and snow. We visited a colony of Adélie penguins which had lost its first hatching of chicks that year when the snow melted too early and all the chicks drowned,” she said.

As seminal as the trip was, however, in helping shape her views on the climate crisis, it also helped guide her nascent political ambitions.

“I had intended to stand as leader of the party before going on that trip. In my application video for the course I said I wanted to learn the skills I needed to stand for leadership in my political party but also lead Scotland into a more sustainable future. So I was going on that course with the intention of learning the skills that I wanted to have.”

In her maiden speech in the Scottish Parliament (watch in the video above) – an MPs first chance to address the Parliament, which is often considered the mission statement for their term – Lorna spoke of hope for climate change and hope for diversity in leadership.

“I look across this debating chamber and what I see is hope. I see Scotland’s most diverse Parliament coming together in this room at this most critical of times. I see more young people, more women, more disabled people and more people with diverse backgrounds and experiences. I am particularly moved that, in this session of the Parliament, we have crossed what I consider to be a key threshold for culture change in an institution, in that, now, more than 40 per cent—it is 45 per cent, actually—of our MSPs are women. I congratulate all the parties that have worked hard to improve their gender balance in order to bring in that fresh talent and those new perspectives,” she said in her maiden speech.

“That is important because, when we change who makes decisions, we change outcomes. Will we, as a more diverse group, have a more positive working culture? Will there be more cross-party working on matters such as a national care service, housing, education and tackling the climate and nature emergencies? Will we be able to think long term—to think about the wellbeing of our people and the stewardship of our land and resources, rather than allowing exploitation and extraction?” 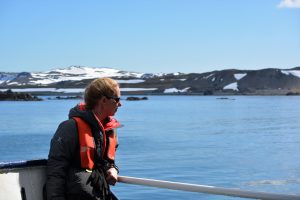 One of the key messages Lorna says she took from the Homeward Bound program and has integrated into her career is the idea that leadership has three concentric circles of self, others and context.

“We do need to accept ourselves, recognising that we deserve a seat at the table just as we are and at the same time we need to do work on ourselves to become the leaders we want to be. We need to consider the needs and perspectives of others through listening to others, and to think about how we can change the story and the context that we are working in.

“Leadership is really about supporting and promoting others, and so a major take-away for me is to try to stop taking the ‘quick option’ of doing things myself, but instead take the time to find someone else, ideally a woman, and support her to step into the space.”

As a Canadian traveller straight out of university, Lorna arrived in Scotland in 2000 with plans to explore Europe, and ended up settling in Scotland and starting her engineering career in the renewable energy. She joined the Green party during the run-up to the 2014 Scottish independence referendum, unsuccessfully running for a seat in  2016, before taking a seat from the party list for the Lothian region in the 2021 elections.

“One of the things about being a Green is that there is no guarantee of getting elected ever, and I was always very happy doing volunteer work behind the scenes and standing as a candidate when there was a need. Elections are unpredictable things though, so sometimes you have to step up and take on an elected post. It is such a privilege to be able to serve my country in this way.”

With her engineering career on hold, possibly permanently, Lorna now looks to deliver on the policy commitments in the cooperation agreement, to demonstrate the Greens in government can get things done.

“For me, I need to ensure that nature restoration and biodiversity matters are considered and integrated into all legislation and strategy frameworks so that we have joined up coherent policies. I’ll deliver at least one new national park. There will be an ambitious deposit return scheme implemented in Scotland which is a major step towards a circular economy and will reduce litter and waste.”

She says the biggest challenge facing any nation striving to achieve net zero is: Capitalism.

“Everything about our society is built on consuming as much as possible. Our economy, our social status, our success markers, our ‘normal’, is all built on buying more, more, more. Unfortunately this leads to a narrative that tackling the climate crisis means that we have to live poorer lives, when in fact is that it means that we can live lives that recognise what really matters: family, friends, time well spent, meaningful work, abundant nature.”

“We have a mammoth task of changing the value system of our society and we are up against the capitalist system and all the people and organisations that have all the money and power are against us. We have to take on the rich and powerful. We live in this bizarre situation where people who have more than they need sit around and decide who gets to have enough.

“What if everyone had enough, and we politicians sat around and decided who gets to have more than they need?”

Scotland hosts the COP26 will host the 26th UN Climate Change Conference of the Parties (COP26) in Glasgow from 31 October – 12 November 2021 and while Lorna isn’t involved in official COP26 negotiations, she will be busy participating in a variety of “fringe” events, including a Homeward Bound alumnae meeting – planning in progress.

“It will be wonderful to meet politicians from around the world to learn more about best practice, to find out what other countries are doing that works and to share what we are doing here. In particular I’m looking forward to meet Green ministers and politicians from around the world, and I have a promise from the two New Zealand Green ministers to take them whisky drinking.”