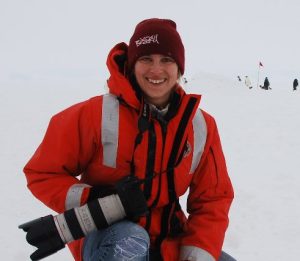 Cassandra is an Assistant Professor in Environmental Studies at the University of Colorado, Boulder. She draws on a diversity of disciplines including marine science, environmental policy, and science communication to find solutions to pressing environmental problems. She has a fierce passion for Antarctica; the last 15 years of her career have focused on marine science and conservation in the region.

She has toiled as a federal fisheries observer on New England groundfish boats, and worked in marine labs across the United States, including graduate work at Moss Landing Marine Labs, where she studied life history of the Antarctic toothfish in the Ross Sea, a population that supports the most remote fishery on Earth.

Driven by a desire to take her science further, Cassandra is also an accomplished science communicator. She’s published more than 150 articles and multimedia stories, and was a core member of The Last Ocean, a grand-scale media project focused on protecting the Ross Sea, Antarctica. To pursue expertise in the policy realm, Cassandra completed a PhD at Stanford University, studying marine protection in the Antarctic. Her work helped drive the adoption of the world’s largest marine protected area in the Ross Sea – one of healthiest and most productive marine ecosystems left on Earth. For her efforts, in 2015, she was awarded a Switzer Fellowship in Environmental Leadership. Cassandra is also currently the Deputy Chief Officer of SCAR’s Standing Committee on the Antarctic Treaty System.