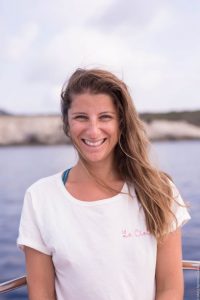 Deborah is passionate about protecting the environment. She has a PhD in population ecology specialised on mathematical models to predict the influence of climate change and fisheries on albatrosses in sub-antarctic islands.

During her post-doc at the British Antarctic Survey in Cambridge, she became a mom and was the only French on the inaugural HB voyage. It was such a revelation that she decided to go freelance, pregnant with her second child GaÏa, in order to grow inspiration for a thriving planet.

Today she is a professional inspirational speaker and a scientific consultant specialised on biodiversity conservation optimism and corporate environmental strategy. She co-founded and directs the NGO Earthship Sisters, an environmental leadership accelerator bound to replicate in several countries.