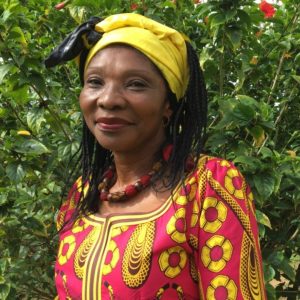 Cécile Ndjebet is one of the well-known leaders of CSO in Africa, an international women’s rights advocate and gender specialist. She started her professional career as a Cameroonian civil servant in 1986 and in 1997, she joined civil society organisations. She has been devoted to women’s rights issues and has been involved in national, regional and international forestry, REDD+ and climate change processes for the past 15 years.

In 2009, to promote women’s direct and effective participation in natural resources management in Africa, Cécile, together with a group of African Women Rights advocates, founded the African Women’s Network for Community Management of Forests. It is a rare Sub-Saharan Africa women’s platform for the forest sector, with 20 member countries from West and Central Africa.

Cécile is an agronomist and social forester, as well as a women leadership trainer and adviser. She holds a MSc degree in social forestry from Wageningen Agricultural University in The Netherlands. She is a PhD Doctorate at the Central Africa Catholic University. During the XV World Forestry Congress held in May 2022 in Seoul, Korea, Cécile won the Wangari Maathaï Forest Champion Award for her energy and dedication over three decades in promoting women’s rights to land and forests.