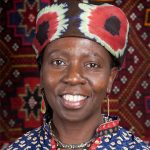 Musimbi is the former President and CEO of the Global Fund for Women (GFW). This role was the genesis of a lifetime spent advocating for girls’ and women’s health and human rights. From national student leader working towards the abolition of apartheid in South Africa, and serving on United Nations and other international youth forums, to becoming the first non-white woman to be appointed CEO of the World YWCA in 1998, which she transformed into an organisation led predominantly by young women under 30.